IACIT is one of the few Brazilian companies to play a considerable role in the main global discussion groups regarding the planning and implementing of new technologies related to the evolution of air traffic management and performance, such as GREPECAS (the Caribbean and South American Regional Planning and Implementation Group), IGWG (International GBAS Working Group) and Technical Committee on SWIM (CT-SWIM), established by DECEA. Not only that, we also own a robust portfolio that includes several exclusive solutions in the areas of both air and maritime navigation aid.

IACIT has proudly developed several exclusive technologies and products in Brazil, such as DME 0200 and GBAS 0100 CAT 1, offering superior subsidies for system operators to obtain accurate information. DME 0200 is the first to be integrated into the DME/DME navigation system - it is currently being implemented by the Department of Airspace Control (DECEA), whose objective is to support Performance-Based Navigation (PBN) and serve as a backup for GPS Navigation. 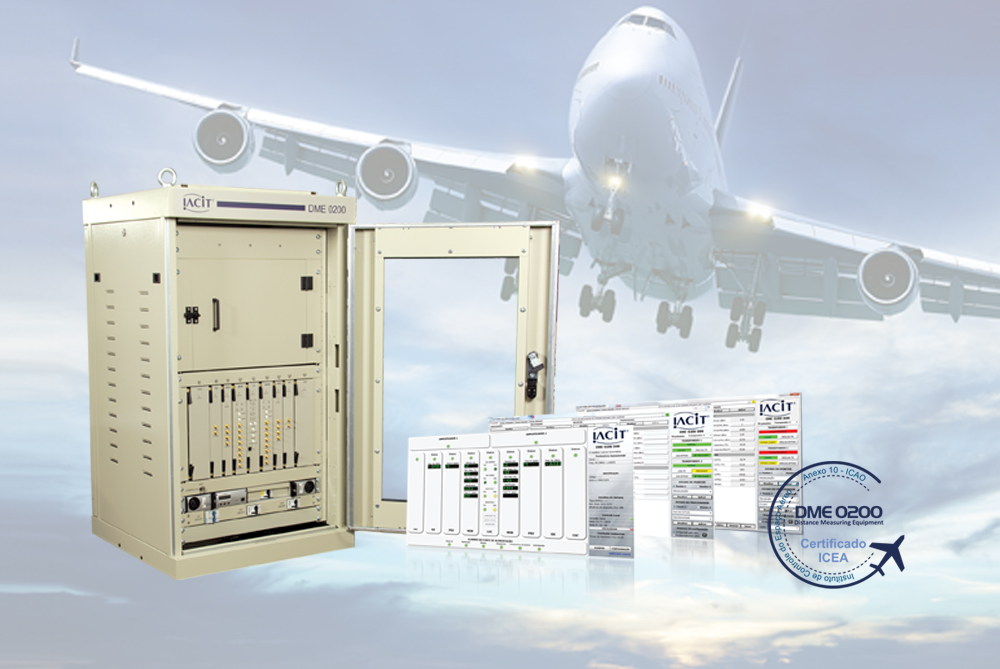 In addition to the above, IACIT has developed software systems in the navigation and air traffic control area which work with the Brazilian Air Force Meteorology Network, such as the TEND-MET system (Short-Term Meteorological Trends for Aerodromes). This system uses artificial neural networks to generate information regarding ceiling weather trends, visibility, wind occurrence, speed and direction of a horizon for up to three hours for aerodromes and STSC (Severe Convective Weather System). The STSC system identifies the volume or area of airspace that may be hazardous to aircraft due to meteorological formations, thus equipping these systems with the ability to not only accurately monitor severe events, but also help foresee any dangerous displacement in advance.

In other words, we are delighted to be able to provide the life-saving systems that help air traffic controllers work with weather forecasts, and help them ensure greater safety for all air traffic by using the latest artificial intelligence and neural networks.

We are always on the lookout for new solutions to modern problems, such as the presence of drones near airports, which is a growing issue for aviation security. By integrating all aspects of our work, we can identify the best solutions to face these and other threats, and so are able to offer complete sensory systems which utilize situational awareness and jamming techniques in the fight against the incursion of unauthorized drones.

The undoubted highlight in our Maritime Traffic Surveillance and Control portfolio is the OTH 0100 Radar. This incredible security surveillance system is one of the few that exist worldwide and the first of its type developed, installed, and operating in South America that can accurately detect targets on the sea surface beyond the horizon. This system provides essential maritime surveillance by detecting vessels at up to 200 nautical miles that do not transmit AIS signals (Automatic Identification System - also called non-cooperative or 'ghost ships') and thus may be committing such as piracy, smuggling, drug and human trafficking. This is one of our many contributions to the protection of our country’s wealth and security.

OTH 0100 Radar plays a crucial role in the preservation of our country's status by monitoring the Exclusive Economic Zone (EEZ), a strip of sea located beyond territorial waters and extends up to 200 nautical miles. We firmly believe that each and every country has the right to use the sea's natural resources responsibly and safely and is also responsible for the present and future of the environment.

With 7,400 kilometers of coastline, Brazil has the equivalent of 3.5 million square kilometers of maritime space under its jurisdiction, a territory that, due to the immensity of its natural and mineral wealth, is called the Blue Amazon. Brazil alone can and should benefit economically from this area in the form of: navigation, fishing, tourism, renewable energy generation, and oil and gas extraction.  This makes the ocean range essential for the Brazilian economy. Thus, protecting this area is crucial for the maintenance of the country's sovereignty.

Another highlight is RADH 0200, IACIT’s ocean radar that employs advanced digital signal processing techniques to obtain intrinsic information from the ocean. It is also adept at mapping ocean currents, detecting environmental phenomena such as tornadoes and tsunamis, and contributing to maritime surveillance.

All these initiatives overwhelmingly show the vital role IACIT plays in ensuring the efficiency of Air and Maritime Traffic Surveillance and Control, and also adding value by delivering systems that guarantee calm and situational awareness of what happens both in the air and at the sea.